Pfizer is still waiting for the green light to complete an acquisition of digital health company ResApp, a deal that looks even better now that its smartphone app for people with obstructive sleep apnoea (OSA) has been approved by the FDA.

Brisbane, Australia-based ResApp has claimed a 510(k) clearance for SleepCheckRx as a prescription-only digital therapy in the software-as-a-medical device (SaMD) category, clearing the path for a commercial launch in the US. It is already approved in Australia and Europe.

Pfizer’s Australian unit made an offer to buy ResApp in April that valued the company at around A$100 million ($75 million), seeking ownership of a portfolio of apps that use artificial intelligence algorithms to both diagnose and measure the severity of respiratory diseases, and has since raised its bid to around A$127 million.

OSA is particularly prevalent in people with underlying cardiovascular disease and affects around 20 million adults in the US alone, many of whom are undiagnosed. It is caused when relaxation of the muscles in the throat cause the airway to narrow, reducing the amount of air taken in and out with each breath.

Sometimes the airway can be shut off completely, and in severe cases, OSA episodes can occur hundreds of times a night, each causing a brief period of wakefulness or shallower sleep. It can lead to other health problems, including high blood pressure, heart attack, stroke and diabetes. 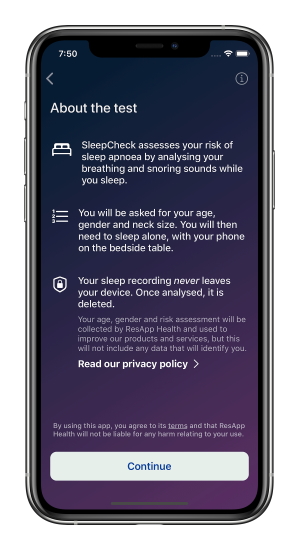 SleepCheckRx is an at-home test that screens adults for OSA by analysing analyses breathing and snore sounds during sleep.

For years, diagnosis of OSA has relied on complex polysomnography equipment to monitor heart, lung and brain activity, breathing patterns, limb movements, and blood oxygen levels while the patient sleeps, so is generally carried out in a clinic.

Having a test that can be carried out at home using a standard smartphone gives physicians “the opportunity to screen their patients conveniently and quickly for sleep apnoea, helping their patients take the first step to getting treatment,” commented ResApp’s chief executive Tony Keating.

Once prescribed, patients receive a code to download the app, activate it before they go to sleep and wake up with the results, which are automatically uploaded to a healthcare provider portal.

In trials involving around 200 subjects, SleepCheckRx algorithms correctly identified around 89% of patients with moderate to severe OSA – i.e. those with an apnoea-hypopnea index (AHI) greater than or equal to 15/hour – with a specificity of almost 78%. That is in the same ballpark as polysomnography testing.

At the moment the prescription version is only approved for iPhone, but an Android version has been developed and will be submitted for approval separately.

Pfizer’s interest in ResApp came a few months after Zoll Medical spent $538 million to acquire Israel’s Itamar, which has a smartphone-linked sensing device for OSA which attaches to a finger and also measures heart and breathing rate and oxygen levels in the blood.

ResApp has a lot more in its portfolio than SleepCheckRx however, and Pfizer’s interest was piqued mainly by its ResAppDx platform, which can be used to detect a wide range of respiratory conditions such as pneumonia, asthma, bronchiolitis and chronic obstructive pulmonary disease (COPD) by monitoring cough and breathing sounds.

The technology was thrust into the spotlight during the pandemic when it was used to develop a smartphone-based screening test for COVID-19.

ResApp also reported this week that Switzerland-headquartered telehealth provider Medgate has agreed to a 12-month extension to its initial one-year commercial licence agreement for ResAppDx in Europe and the Philippines.