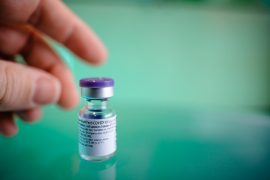 Pfizer and BioNTech have signed a new $3.2 billion supply contract with the US government for COVID-19 vaccines, covering 105 million doses that may include Omicron-targeted shots.

The contract covers 30 µg, 10 µg and 3 µg doses – covering adults, children and infants, respectively – and will include an updated Omicron version “subject to authorisation from the FDA,” said the two companies.

The 103 million doses are planned to be delivered as soon as late summer 2022 and continue into the fourth quarter of this year, and the number could rise if needed as the federal government has taken an option on 195 million more.

The order comes hard on the heels of an FDA advisory committee meeting that recommended the use of Omicron-directed vaccines for the US’s autumn immunisation campaign, which will try to get ahead of a predicted new wave of COVID-19 infections as winter approaches.

The deal has been pushed through despite warnings from the Biden administration that it would be unable to secure enough booster shots for every American, if they are needed later in the year, unless additional funding currently being held up in Congress is released.

It said at the time that the Department of Health and Human Services (HHS) needed to start contracting for additional boosters “imminently” to secure sufficient supplies for a September campaign, and sought $22.5 billion to pay for that effort as well as other pandemic countermeasures.

That funding is still on hiatus, so the latest contract came from the re-allocation of $10 billion in existing funding from COVID-19 response efforts, said HHS.

“The Biden-Harris Administration is committed to doing everything we can to continue to make vaccines free and widely available to Americans – and this is an important first step to preparing us for the fall,” said HHS Secretary Xavier Becerra in a statement.

Pfizer and BioNTech’s updated COVID-19 shot, which targets the wild-type virus and the original BA.1 Omicron subvariant that emerged last winter – has been shown to stimulate a stronger immune response against Omicron than its current Comirnaty vaccine in a phase 2/3 trial.

It has lower activity however against the newer subvariants BA.4 and BA.5, which are gaining ground in the US and other parts of the world. That pattern was also seen with Moderna’s updated vaccine, which targets the same strains.

While the FDA panel said it would prefer the autumn boosters to target BA.4 and BA.5 directly, Moderna and Pfizer/BioNTech have said it may not be possible to deliver those in time, unless the FDA is prepared to authorities them on the strength of preclinical rather than clinical data.

The regulator has pledged to deliver guidance on the compositions needed for the coming campaign as quickly as possible.

“As the virus evolves, this new agreement will help ensure people across the country have access to vaccines that may provide protection against current and future variants,” commented Pfizer CEO Albert Bourla.

Eyebrows are being raised however at the per-dose cost in the new contract, which works out at around $30, more than 50% higher than the $19.50 paid by the federal government for supplies of Comirnaty.

A Reuters report says that some of the vaccine intended for adults in the new contract will be supplied in single-dose vials, which are more expensive to manufacture but reduce waste resulting from unused shots from multi-dose vials being discarded.