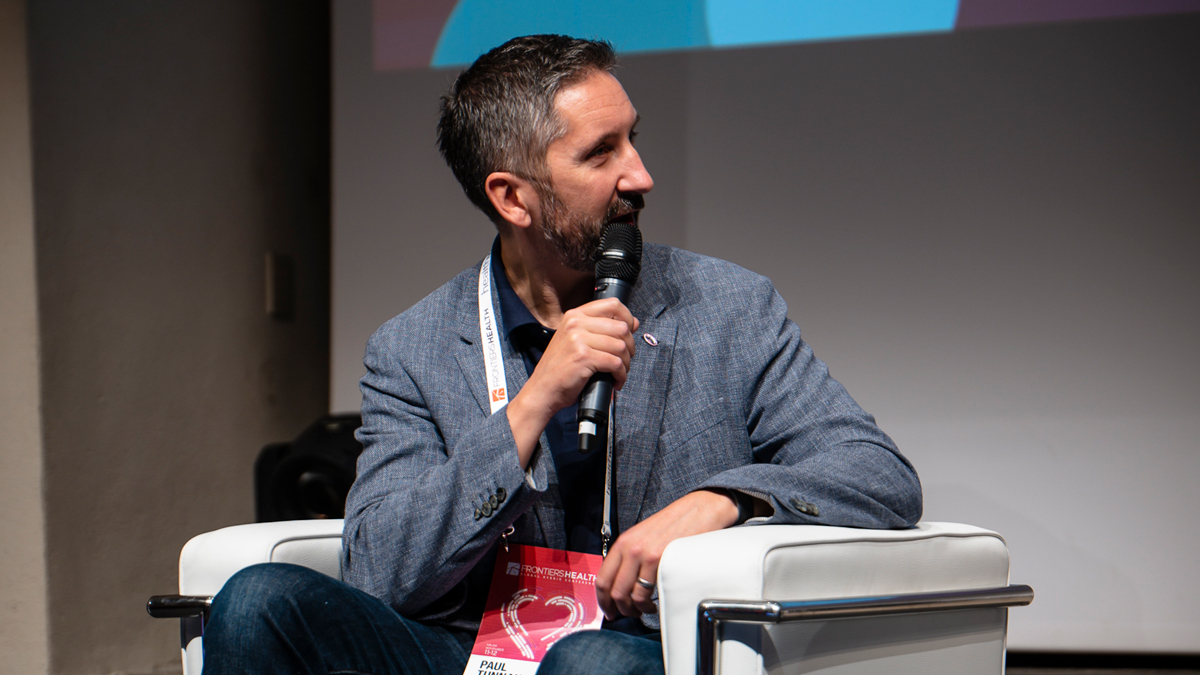 As the Frontiers Health 2022 conference in Milan on 20th to 21st October draws ever nearer, pharmaphorum has been catching up with members of the event’s Steering Committee to find out more about what drives both them and the event itself. This time, Paul Tunnah – pharmaphorum’s very own founder and chief content officer and managing director UK at Healthware Group – discussed healthcare’s digital transformation (this year’s guiding theme) and his own journey into the digital space.

Tunnah began his career as a scientist, studying biochemistry right through to PhD at the University of Oxford, his work at that time concerning very early stage, novel anti-cancer therapies (or ‘structural biophysics’). Asked how he made the shift from working out the structure of proteins and how molecules bind to those proteins, to the founding of pharmaphorum and focusing on the digital space, his answer was clear: communication.

“One of the things I learned through my early academic years is that I was surrounded by brilliant people. I mean, brains the size of planets in many cases. But often they were not great communicators and it dawned on me that, you know, you can be fantastic at doing something, but if you can’t communicate about it, then, that’s not going to be very effective,” he said.

Tunnah realised, in fact, that that communicative passion lay within himself and wasn’t satisfied by academic work. Instead, he shifted to consulting and, after a period of time, the launch of pharmaphorum in 2009.

“[My] passion for pharmaphorum as a publication has always been not just sharing information, but connecting people, and that communication piece, because whenever you get all the different stakeholders together in healthcare, when you have the pharma industry engaging with the patient, with the doctor, with the payer, et cetera – really good things happen and they find mutual points of interest,” he explained.

As it turned out, pharmaphorum’s launch coincided with digital’s early permeation of the healthcare industry.

“[Digital] was becoming an increasing feature of our content, whether we were talking about what patients were doing in the industry, what tech companies were coming in, et cetera. So, all of that led to my interest in digital, I guess initially; digital communications and how things like social media were developing,” he said.

As the influx of digital started to shape pharmaphorum, in fact, Tunnah was at the same time witnessing an unfolding digital transformation of healthcare right across the spectrum of its parts.

“Because digital permeates every aspect of the industry, and people are often talking about digital and maybe talking about very different things, I think about the journey of healthcare and life science companies in three stages,” he explained.

The first of those had been Tunnah’s own springboard away from academia: communication.

“The first stage of digital transformation was really all about communications. So, this was from the early 2000s and the dot com boom, when you had online forums springing up and then, obviously, through the 2000s you had social media springing up – things like Facebook – and so, what that did was, it really democratised access to information, including healthcare information. [This] enabled people to access that in a way they hadn’t done before. So, historically – certainly pre-2000 – if you look at the way prescription drugs were communicated, it was very tightly controlled: it was pharma companies speaking to doctors and the doctor would speak to the patient and tell them what they thought the right solution was,” he said.

But a change was underway, one we are now seeing realised in our day-to-day existence.

“As you move into the 2000s, because of these forums and social media and Google, patients would go online and research and find out about their own medicines and start challenging their doctors and start challenging the pharma companies and life science companies: the whole landscape really changed and, suddenly, that kind of, I guess, control of the narrative […] had been slightly lost,” he explained.

Following that perceived dip in narrative control, Tunnah holds that the second stage of healthcare’s digital transformation lay in omnichannel communication, a stage many companies, in different ways, are still in — and which none have seemingly yet managed to perfect.

“People use different terms: they use multichannel, which is for marketing, whereas omnichannel tends to imply more bringing in the sales calls and the people as well. But the point is that this is all about technology and how to smartly use technology by big companies to better engage with their customers,” he said.

What it comes down to, essentially, is the customer journey.

“Rather than trying to bombard them with all the information at once, you’re breaking the story down into smaller chunks, you’re walking them through that journey, but you’re also understanding the individual customer – n=1 – and exactly what’s relevant to them, and not trying to tell the whole story, but giving them the piece they need at that time,” he explained.

Seedings of a digital therapeutic future

The third stage, as Tunnah sees it, focuses on that critical component of communication in digestible form and elevates it to the interactive support space.

“Digital health, for me, is about digital applications that either support medicines – so, you think about applications, for example, for diabetes patients that will track their vital signs, will track their blood sugar levels, will in some cases, based on that day, be able to give them early warning signs of when they’re going to have a low- or high-blood sugar event – now, in most cases those are not going to replace medicines, but they will provide that more holistic support which gives the patient the better outcome and makes the medicine more effective,” Tunnah reasoned.

It’s not just physical health which can more readily be addressed by healthcare’s digital transformation, but mental health, as well.

“There’ve been studies on Facebook where, if you look at the language people are using, you can pick up signs of depression because their language changes. So, you’ve got digital companions, digital diagnostics, and then the third area – which is probably at the earliest stage, but very, very interesting – is digital therapeutics and, as the name would suggest, these are things which in theory could replace drug treatments because they have a therapeutic benefit,” he went on. “You [also] have things like cognitive behavioural therapy applications, so, Woebot is a good example, [or] Haelios, and these are, as the name would suggest, providing a cognitive therapy through applications that will tackle things like depression and, in some cases, means people that are taking antidepressants can stop taking them or will not start.”

Looking to the future, Tunnah sees a changing role for pharma in digital transformation.

“Pharma has realised it’s not just about technology: it’s about change management and process and content and those softer things […] But then, if you look at where we are with digital health, you’ve had technology coming into that and you’ve had both big tech companies, the Amazons and the Samsungs, those big players, coming in, plus a lot of start-ups. Now, the narrative, probably seven or eight years ago, was very much around how big tech companies could replace pharma and I don’t hear that narrative so much anymore, for a couple of reasons,” he ventured.

“If you look at companies like Amazon and Google, the big tech companies, whenever they’ve gone into drug development on that side, they’ve found it incredibly hard. It’s very risky; it’s very hard to do. It’s long development cycles and it’s very different […] If you then look at the digital health start-ups, of which there are thousands […] again, there’s been, you know, discussion as this has taken off around whether these will be competing with pharma and challenging them. And, actually, the answer in most cases is no. It’s much stronger when they work together in partnership,” he said.

Those partnerships also become essential as the requirements for bringing a digital health product to market become more defined.

“[Digital transformation] also means the development process for digital health applications, even though technology-wise they’re much quicker to produce, starts to resemble clinical trials for biotech companies and, once you get into clinical trials, you’re taking very, very expensive processes that require hefty investment and so, again, you probably want that partnership with the pharma companies,” Tunnah reasoned.

The ‘cool tech’ tech companies bring to the table won’t be doing away with the need for medicine, at least not any time soon. Nonetheless, patients exist in the real world with real world, potentially medicine-impacting lifestyle variables. And the patient is, really, what healthcare is all about.

“Medicines are a core part of healthcare and will remain a core part of healthcare in many, many areas. But there’s a difference between a clinical trial for a medicine and the real world. […] In the real world, patients are impacted by all kinds of stuff […] that has an impact on the outcome from the medicine. So, if these digital health applications can help support some of that, then it gives the patients a better outcome […] It’s good for the pharma company, good for the patient, obviously good for the digital health company because they get the investment and support to scale up – so, everybody wins,” he said.

The frontiers of patient centricity

Tunnah will be holding a panel on digital transformation at this year’s conference that looks at the broader picture of digital transformation – not just omnichannel communication or customer engagement, but digital health and the interlinking of these two sides. On the second day, he will be running a workshop on patient centricity.

“Patient centricity for pharma has historically been about how do we really understand what matters to the patient,” he explained. “And if we can understand that and plan clinical trials to be more reflective of what’s happening in the real world and develop patient thought programmes that help bridge that – that’s good for everybody.”