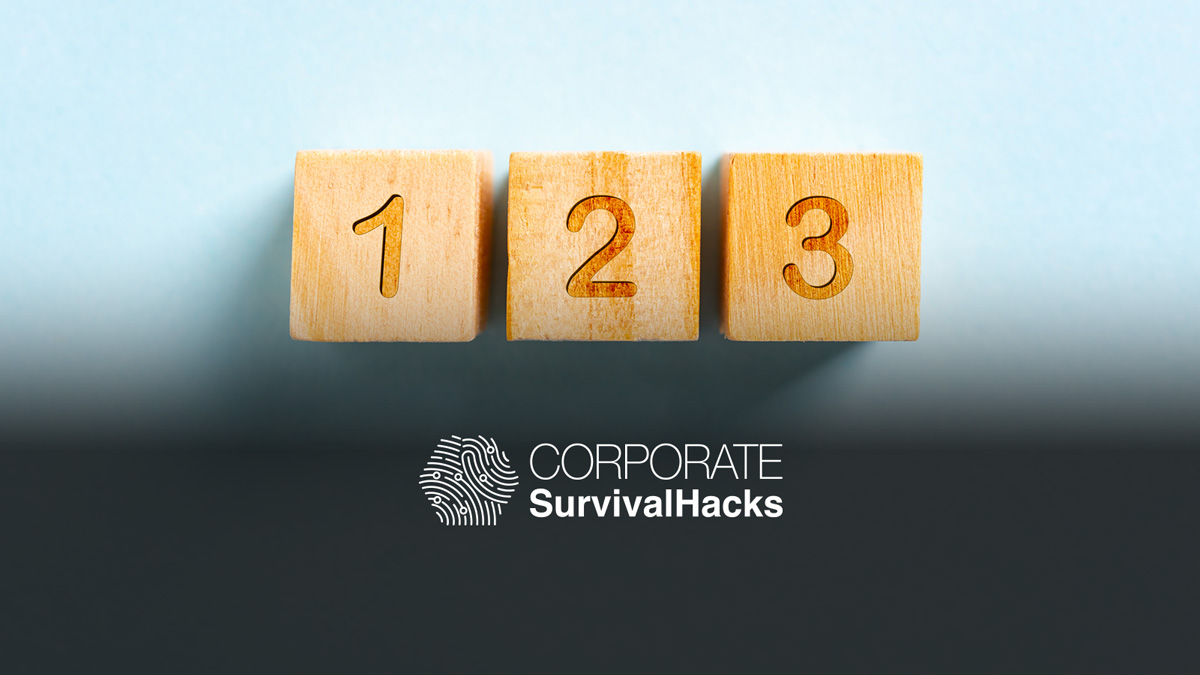 Oliver Stohlmann’s Corporate Survival Hacks series draws on his experiences of working in local, regional and global life science communications to offer some little tips for enjoying a big business career. This post, which includes references to Marshall B. Rosenberg’s psychological concept of Nonviolent Communication, shares a simple three-step method to solving conflicts without spoiling foundational human relationships – and sometimes even improving them.

We face them every day: issues obscuring progress at work, hard-to-get-on-with peers, relatives with aggressively different opinions, that nagging neighbour complaining about every leaf blown onto their drive from our tree, or something – or someone – else getting on our nerves big style.

Situations, certain behaviours, established routines that should be improved … things we’d like to be able to address openly, but when we do that, there’s a risk of offending the other person, escalating a disagreement into a full-blown conflict, and/or destroying their morale and earning mediocre collaboration and performance in return.

But how could we address issues candidly without spoiling the underlying relationships; or even strengthen the latter through a constructive conflict resolution process?

You have a choice

Difficult situations and people ‘happen’. That’s life. Yet you have a choice: you can either ignore these and let them linger, hoping the issue or discomfort will reduce and perhaps vanish over time; or that you’ll learn to live with it. And, frankly, for many, an insignificant problem that is not a bad strategy. Since we should not fear a mountainous challenge every time we spot a molehill.

However, there will be moments when letting things flow isn’t a good plan: a major project outcome at stake, someone’s health in jeopardy, a partnership or close friendship at risk. In these and many other circumstances, I find it’s worth a try to jointly improve or even remove the issue and protect, if not strengthen, the relationship.

A ‘nonviolent’ approach to communication

As a student of Communications, a book that fascinated me early on in life was ‘Nonviolent Communication: A Language of Life’ by clinical psychologist Marshall B. Rosenberg. Based on his clinical experience in person-centred therapy, he offers an enlightening look at how peaceful communication can create compassionate connections with family, friends, work colleagues, and other acquaintances.

Rosenberg does not position his approach as a technique to end disagreements but rather as a method designed to increase empathy and improve the quality of life. Over time, while the entire book of around 250 pages is a fascinating reading and inspiration, I distilled and mixed the essence of Rosenberg’s book with my own experiences and those from coaching other individuals, into what since I’ve called my simple three-step guide to conflict resolution without spoiling the underlying relationship – and often even improving the latter.

In my first job, a few months after college graduation, I got promoted to leading a small team of two. We were a young PR agency with an enthusiastic workforce. Collaborating closely with my new team in the office, I noticed that one of them, a student in his early 20s, constantly carried a strong odour of sweat. My gut reaction was to ignore this, certainly not stick my nose into something as delicate as a smell. Until others started talking about it, among each other and to me as the person’s manager. The twist was that he was otherwise a really well-liked chap, hard-working, helpful and extremely successful. We didn’t want to offend and risk losing him, through careless feedback or a clumsily led conversation.

Yet something had to be done about this issue, which increasingly led to others keeping a distance not wanting to work on projects with this particular team member. The task of providing feedback fell to me. I dreaded having to have this kind of conversation. Anything – but not this.

Marshall Rosenberg and my three-step approach rescued me.

Here’s what you do: First, create empathy by asking permission to share an observation you’d like to bring to the other’s attention. They may or may not be aware. However, you’ve decided to seek an open conversation to make sure they become aware of something that needs to be solved or improved. Have this conversation one-to-one. It’s something that stays between the two of you.

Once the other has agreed – they typically will – do share what you and/or others have been observing. Get straight to the point. Just share the facts without judgement nor emotions. The latter is key – if the person receiving feedback feels singled out, unfairly blamed, attacked or worse, they will not partner in solving the matter.

Secondly, in similar brevity, clarity and empathy, describe the consequence/s of the current status or behaviour you’ve just been addressing. Again, keep emotions and judgement out – just state the facts.

Lastly, and here’s where your feedback ends, and you widen the monologue to a proper, two-way conversation: Ask the other person what ideas they may have to resolve the situation, unilaterally or jointly, in a mutually beneficial way. Reassure them that you are invested in a material outcome and that they can count on your full support and partnership. The critical point, however, is that the resolution plan comes from them – not you. You might help them shape it; you may have an active part in that plan – but it needs to be their plan.

This is based on my fundamental experience from coaching business clients, that almost any solution imposed on a person from the outside ultimately fails or isn’t seriously attempted in the first place; while self-derived ideas typically come with a feeling of ownership, accountability, and personal investment. They stand a much higher chance of implementation – and to succeed.

The three-step conversation will keep them constructive

For instance, my difficult conversation with the ‘sweaty’ colleague would have run along these lines. You can translate this into nearly any other business or personal context:

Step 1: “May I provide you feedback about something I think you should be aware of? The aim of this conversation is to help you be aware of, and manage, a situation that myself and colleagues have been noticing lately. If that’s alright, I’ll cut to the chase in a moment. But let me first reassure you that we all absolutely love working with you. You’re an asset to our agency, and I would hate to lose you. However, we’ve been observing through recent weeks a distinct, strong odour of sweat each time you’re in the office.”

Step 2: “As a consequence, you may have noticed that several people keep a distance. Although you’re such a well-liked, spirited colleague and everyone benefits from your creativity and energy, people also tell me they find it difficult to work physically close to you. I’m sorry to say this is beginning to impact our business. Last week, [a team member] refused to work in the office, and therefore, we weren’t able to complete that mock-up in time for the client pitch.”

Step 3: “As I said, we really want to keep you on board. You are a stellar contributor and driver for the entire team, and I see a bright future for you. But given this observation, what do you think you might be able to do about it?” And here, the hard part: pause. Let them come. Be comfortable with a long silence or other reaction. They need to digest, they need to process. In nine out of ten cases, however, they will come round to be very constructive.

Nonviolent communication, according to Marshall Rosenberg, is a tool with the goal of firstly creating empathy in the conversation. The idea is that once there is empathy between the parties, it will be much easier to talk about solutions that satisfy everyone’s fundamental needs. The goal is interpersonal harmony and to avoid coercive forms of discourse, gather facts through observing without evaluating, let alone judging, and genuinely and concretely expressing feelings and needs to formulate effective and empathetic requests.

For me – and this is perhaps why I created my own variation on Rosenberg’s model – it’s also important to be able to conduct a simple enough conversation and follow through on it. It’s not easy to be tough on someone, to not get distracted nor caught up in lengthy side tracks e.g. if the other person gets distraught or argumentative. When you embark on this kind of conversation, you want to be able to follow it through with discipline, clarity and a focus on the important third step: viable suggestions for resolving the issue at hand.

How did that difficult conversation described above wind up? My team member had no inclination of the issue and turned out most grateful that someone was telling him. We knew he was an avid tennis player, but what we didn’t appreciate was that he had recently changed his practice from evenings to early mornings, to then proceed to the office without taking a shower for it would cause a delay he thought he couldn’t afford. His – own – path to resolving the issue couldn’t be simpler: from now on, he would take showers after tennis practice … and we would all live happily ever after.

Oliver Stohlmann is a communications leader with more than 20 years’ experience of working at local, regional, and global levels for several of the world’s premier life-science corporations. Most recently, he was Johnson & Johnson’s global head of external innovation communication.